If you are considering buying a new SUV and have already begun to look at Subaru car finance, you may be interested to know that the Japanese brand has just previewed a new seven seater SUV. The SUV segment is highly competitive and with more and more brands providing the additional flexibility of a third row of seating, this new model should be an exciting offering. 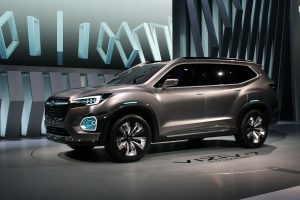 The new model was previewed as part of the Viziv-7 concept at the LA Motor Show and was confirmed as a new three row, seven seater SUV. According to Subaru vice president Takeshi Tachimori, the production model Viziv-7 is set to be the largest Subaru vehicle ever. The model measures 2030 millimetres wide and 5199 millimetres long, on a 2990 millimetre wheelbase. It stands 1828 millimetres tall, creating an imposing presence. Should the production model measure up to the concept dimensions, this new Subaru would comfortable dwarf most of the natural competition. This includes the Toyota Kluger, Volkswagen Atlas, Hyundai Santa Fe, Ford Explorer and Honda Pilot, which all measure 5.0 metres or less in length. The only current models which come close to these dimensions are the eight seater Chevrolet Traverse at 5173 millimetres and the Buick Enclave at 5100 millimetres.

When We Can Expect It:

The production Viziv-7 is estimated to become available for sale in the North American market early 2018. This will provide an effective replacement for the far smaller Tribeca that was discontinued back in 2014. In regards to our local market, there are no confirmed details about whether it will be released here. At this point, it seems unlikely that this new model will be available in Australia. Back in September, the managing director for Subaru Australia, Nick Senior stated that the new SUV would be “US only” as it is built in the United States and the production line in the US is only left hand drive. However, Subaru does consider global demand very carefully and simply because the model will not be available immediately, does not mean that it would be completely ruled out in the future.